From the early years of the Celtic Church, Llandough had been known as a holy place, dedicated to Christian worship. Dochdwy’s Llan in the 5th and 6th  centuries, together with Llancarfan and Llanillted Fwr, were foremost among the Christian communities of Morganwg (Glamorgan).

The first permanent church building was erected in the 12th century. However, St. Dochdwy’s is noted for the fine Celtic Cross of Irbic in its churchyard dating back to the 10th/11th century. The cross is complete, with the exception of the top, which has been mutilated, and is unique in design, being quite different from that of any other cross in Britain. The monument is made of Sutton stone and measures 9’9” by 2’3”, consisting of an uppermost square shaft, with bold roll mouldings at the four corners, supported on a pedestal resembling a column, with the capital and base each formed from a separate stone.

Extensive renovation work was carried out in July 2013.

The “saddle-back” tower is instantly recognisable as far afield as Caerphilly Mountain. The church interior is a particularly charming example of Victorian decorative Gothic, with polychromatic brickwork after the style of the eminent architect William Butterfield who was building nearby St. Augustine’s Church at the very same time.

The present day St. Dochdwy’s was consecrated by Bishop Olivant on 12th July 1866. It incorporates the original Norman Chancel arch, which now links the  south aisle to the bell tower.

It was built for £2,600 by David Jones of Penarth to the design of Samuel Charles Fripp, a Bristol architect. 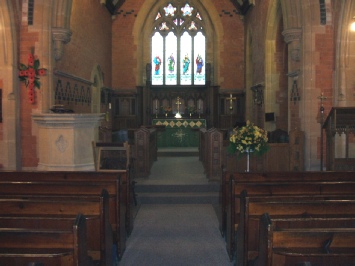 The first church building, after restoration in the 18th century, remained in use until 1820.

This original building made way for not one but two new churches in the 19th century, the first being deemed too small for the growing population after only 40 years of service.

This church was removed and rebuilt as St. James’ Leckwith, making way for the current St. Dochdwy’s in 1866.

The current church has a neat though modern appearance. It has a Chancel and Nave only, with a bell tower over the west end that can house two small bells.

The Chapel of the Royal British Legion

Interior of the church